In 2017, 43% of urban bicyclist fatalities occurred at intersections, writes the National Association of City Transportation Officials (NACTO) in the 2019 publication Don’t Give Up at the Intersection.

Intersections are dangerous for pedestrians and bicyclists. Because they were designed for cars.

Even as protected bike lanes increase in number – expanding 600% between 2011 and 2019 – unsafe intersections are enough to discourage bicycling. Intersections that are designed with large turning radii and wide lanes lead to exposure and risk for people walking and biking, and bicyclists generally lose the comfort of the protected bike lane.

What steps can be taken to improve problematic intersections for bicyclists? As research continues to grow in this area to provide practitioners with countermeasure selection and refinement guidance, there is one multimodal intersection design that’s starting to show its face in the United States: the protected intersection.

What is a protected intersection? In a protected intersection design, bicyclists do not have to merge with car traffic at any point. The bicycle lane is extended around the intersection, protected at each corner by a corner island that also serves to tighten the turn radius. Bicyclists who want to cross the street pull up past the crosswalk into a bike queue area that, combined with signal phasing, gives them a head start when the light turns green. The curb extensions narrow the roadway so that both bicyclists and pedestrians have a shorter crossing distance and are more visible by the time the driver pulls around the corner island.

Applicable at both signalized and stop-controlled intersections, the protected intersection design (also known as a “Dutch junction”) originated in the Netherlands, where it is now a fairly common intersection type.

A 2015 article from HuffPost says, “The Dutch junction is a clever – albeit surprisingly simple – solution to a conflict that’s plagued communities for years. It’s especially effective, since it specifically addresses the place where bicycles and cars are most likely to collide – intersections.” 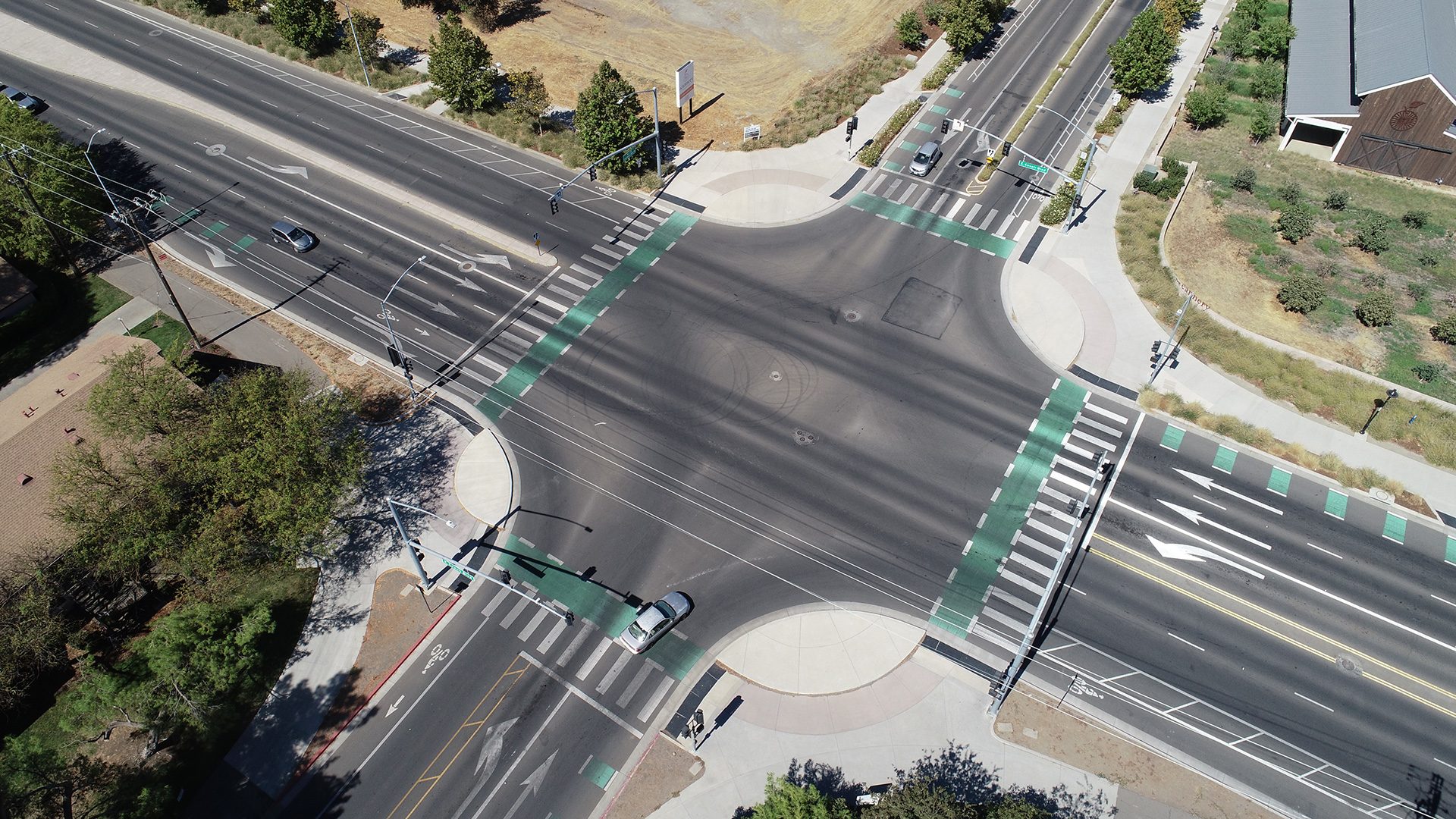 NCHRP Research Report 926, “Guidance to Improve Pedestrian and Bicyclist Safety at Intersections,” is the outcome of a research project geared toward making intersections safer for people walking and biking. Kittelson was glad to be a part of a consultant team led by the University of North Carolina Highway Safety Research Center to develop guidance for transportation practitioners to improve pedestrian and bicycle safety at intersections through design and operational treatments.

Protected intersections are made up of building blocks that improve safety outcomes for bicyclists and pedestrians at intersections.

What makes the protected intersection a promising design? To us, it becomes clear through examining the individual components. Protected intersections are made up of building blocks that improve safety outcomes for bicyclists and pedestrians at intersections. These elements have already been embraced in guidance such as the 2015 Federal Highway Administration (FHWA) report Separated Bike Lane Planning and Design Guide and the 2015 Massachusetts DOT Separated Bike Lane Planning & Design Guide. The protected intersection is what brings them together, carrying many of the benefits of protected bike lanes through what remains a dangerous place of conflict for pedestrians and cyclists. 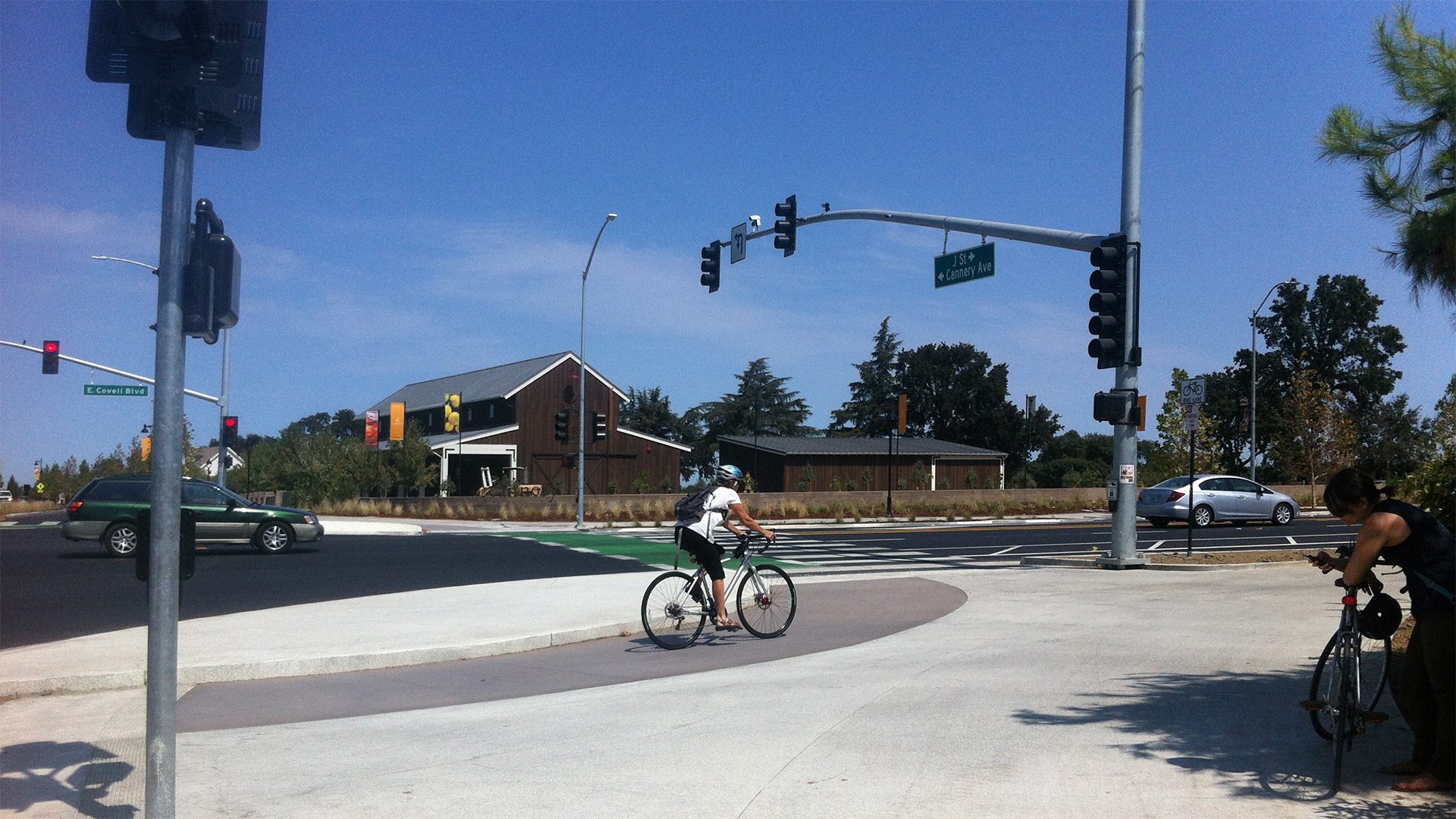 A bicyclist makes a left turn at a protected intersection.

The Proven Elements of a Protected Intersection

The combination of the following building blocks makes the protected intersection a more bicycle- and pedestrian-friendly intersection design. You can read more about many of these concepts in NCHRP 926 (page numbers below).

Bicycle lane extension through intersections. Transitioning from a comfortable protected bike lane to an unprotected intersection is a stressful experience for bicyclists, and undermines many of the advantages of protected bike lanes. Bicycle lane extension pavement markings through intersections are intended to provide bicyclists with a clear, highly visible pathway through an intersection and create a safer bicycling environment. An additional benefit is drivers are more aware of the presence of bicycle through-traffic. (p. 132-133)

Leading bicycle/pedestrian interval. Bicycles take longer to accelerate than cars, and leading bicycle intervals (LBIs) provide bicyclists and pedestrians with a head start when crossing at a signalized intersection. LBIs can be programmed into existing signals to give bicyclists and pedestrians an advanced green signal several seconds before motorists are allowed to proceed through the intersection. This extra time provides through-bicyclists with an opportunity to establish their presence in, or to clear an intersection before motorists start turning. (p. 156-159)

Curb extensions. Curb extensions make the roadway narrower by physically extending a curb line or sidewalk. This has multiple safety benefits for pedestrians, including shortening the crossing distance, increasing visibility, keeping motor vehicles from parking too close to crossings, and reducing the curb radii. (p. 144-145)

Two-stage bicycle turn box. Rather than forcing bicyclists to merge across multiple lanes of traffic or wait in a shared travel lane with cars, the two-staged left-turn allows bicyclists to go in two stages in the direction they’re already traveling. Outside of the protected intersection design, this is accomplished through a two-stage left-turn queue box (also known as a Copenhagenâ€Left or jughandle turn), which designates an area outside of vehicle conflicts for bicyclists to wait for traffic to clear before proceeding in a different direction of travel. Especially on roadways with high speeds or traffic volumes, this can greatly improve safety outcomes for bicyclists making left turns.

No turn on red signs. In most places, turning right on red is a default condition of existing laws. Posting a sign to restrict a right turn on red can eliminate conflicts between turning vehicles and pedestrians and/or bicyclists during a concurrent walk (or bike signal) phase. These signs can be either static or dynamic (restricting turns during certain times of day or during certain signal phases).

Benefits of Protected Intersections for Bicyclists

Benefits of Protected Intersections for Pedestrians

The combination of building blocks described above also creates a safer environment for people walking through intersections.

Where Are Protected Intersections Being Built Today?

In 2017, Streetsblog reported that protected intersections were spreading faster than protected bike lanes did in their early days in the U.S.

“It’s entirely possible that the spread of protected bike lanes has primed the national network of bikeway design professionals, making it easier for good ideas to spread quickly,” says the article.

As the idea of protected intersections catches on, forward-thinking agencies are designing and implementing protected intersection designs, taking an important step in the movement toward streets that are safer for all users. Here are two examples that you may be able to walk or bike through yourself in the next few years.

Under our continuing services contract with Florida Department of Transportation District One, Kittelson was asked to conduct an urban design and corridor master plan for Cypress Gardens Boulevard in Winter Haven, FL. Very early on in the project we identified the intersection of Legoland Way/Register Road and Cypress Gardens Boulevard as an important walking and bicycling intersection. Currently it has a very suburban, almost rural quality, yet it serves as the primary entrance to LEGOLAND Florida. There has been significant hotel and retail growth nearby, and many more users are choosing to walk and bike to the theme park, but the intersection is not prepared to handle any other traffic besides motor vehicles.

The City initially had some ideas about adding a pedestrian bridge at this location, but cost and adjacent properties made it a less feasible option. Instead, we looked to solve it in a creative fashion as a pedestrian protected intersection. Kittelson is now in the process of scoping a RRR (Resurfacing, Restoration, and Rehabilitation) project that FDOT D1 had previously planned to include the protected intersection. The RRR project is scheduled to be designed later this year with implementation in late 2021.

By expressing the need for protected facilities connecting key points of interests, an active and vocal bicycle advocacy group in Arlington County has helped to spur multimodal initiatives in the area. There are now two protected intersection projects in the final design stage in Arlington County: 12th Street and Army Navy Drive.

For both projects, Kittelson reviewed and provided input on the conceptual designs and then modeled those concepts using microsimulation. After the traffic analysis portion vetted more details about each, we were contracted to lead the traffic signal design for both, and are excited about helping Arlington County bring these designs to life. 12th Street is anticipated to be opened in 2021 or 2022, and Army Navy Drive is anticipated to be opened in 2024.

While every intersection should be designed to best meet the needs of its users and community context, the protected intersection design offers many merits that should be seriously considered as cities seek to make active transportation safer and more comfortable, and it’s exciting to see momentum behind it in the U.S. This is a quickly-unfolding story, so reach out if you’d like to discuss more!

What We Learned From Our First-Ever Virtual Internship Program