Electric buses have zero tailpipe emissions, are quieter, easier to maintain, and have lower lifecycle costs than diesel buses. Despite drawbacks including higher upfront costs and shorter driving ranges, it is surprising that US cities are so far behind the electric bus curve. What’s the hold-up?

At the beginning of 2019, there were almost 425,000 electric buses in the world. Approximately 421,000 of those buses were in China. And the Chinese market is expected to have more than one million e-buses by 2023.

For comparison, the US had 300 electric buses compared to China’s 421,000. This huge discrepancy is not due to China having a vastly superior electric charging infrastructure. As of 2018, US customers had bought roughly 1.1 million electric cars, including popular models by Tesla, Chevrolet, and Nissan.

In talking with Doug Jamison – a senior ITS developer with Orlando’s LYNX – I found out that it is not just upfront costs holding up electric buses in the US.

First and foremost, transit agencies face regulatory hurdles to buying electric buses. Most of these hurdles are related to strings that come with using Federal Transit Administration (FTA) dollars. The Buy America provision states that FTA funds may not be used to purchase rolling stock (including buses) that do not meet a certain threshold of American-made materials. The components in battery electric buses, as well as the buses themselves, are mostly manufactured abroad.

Another FTA regulation caps the number of extra buses (“spares”) that a transit agency may have on hand. The intent of the cap is to prevent transit agencies from spending FTA dollars on more buses than they truly need. However, because of battery electric buses’ shorter driving range and lengthier charging times, a higher proportion of spare buses may be needed when compared with a diesel bus fleet. But this may change as charging technology evolves: Chicago’s CTA is installing fast-charging stations that can charge buses in 5-10 minutes. The buses can then run for 75-120 miles until needing to be recharged.

As demand for electric buses grows in the US, however, more manufacturers will surely set up domestic facilities. Van Hool – a major Belgian bus manufacturer – is opening a new manufacturing facility in Tennessee, where they plan to build diesel, hybrid electric, and electric vehicles. Tesla is also looking to build their next “Gigafactory” in the Midwest, which should help to accelerate the adoption of battery-powered vehicles of all types in the US.

A perhaps-overlooked barrier to mass adoption of electric buses is the lack of skillsets and expertise on the subject at transit agencies. Transit agencies in the US are great at sketching new routes, developing schedules, and operating and repairing buses. But they do not yet have know-how on battery technology, charging requirements, electricity consumption patterns, and all that comes with operating an electric fleet.

Operating electric vehicles introduces several new nuances to planning and operating a transit route. For example, on a hot summer day with special events drawing lots of passengers, a battery that is supposed to last for the whole day would drain too quickly. What procedures are in place to keep service going in those instances? 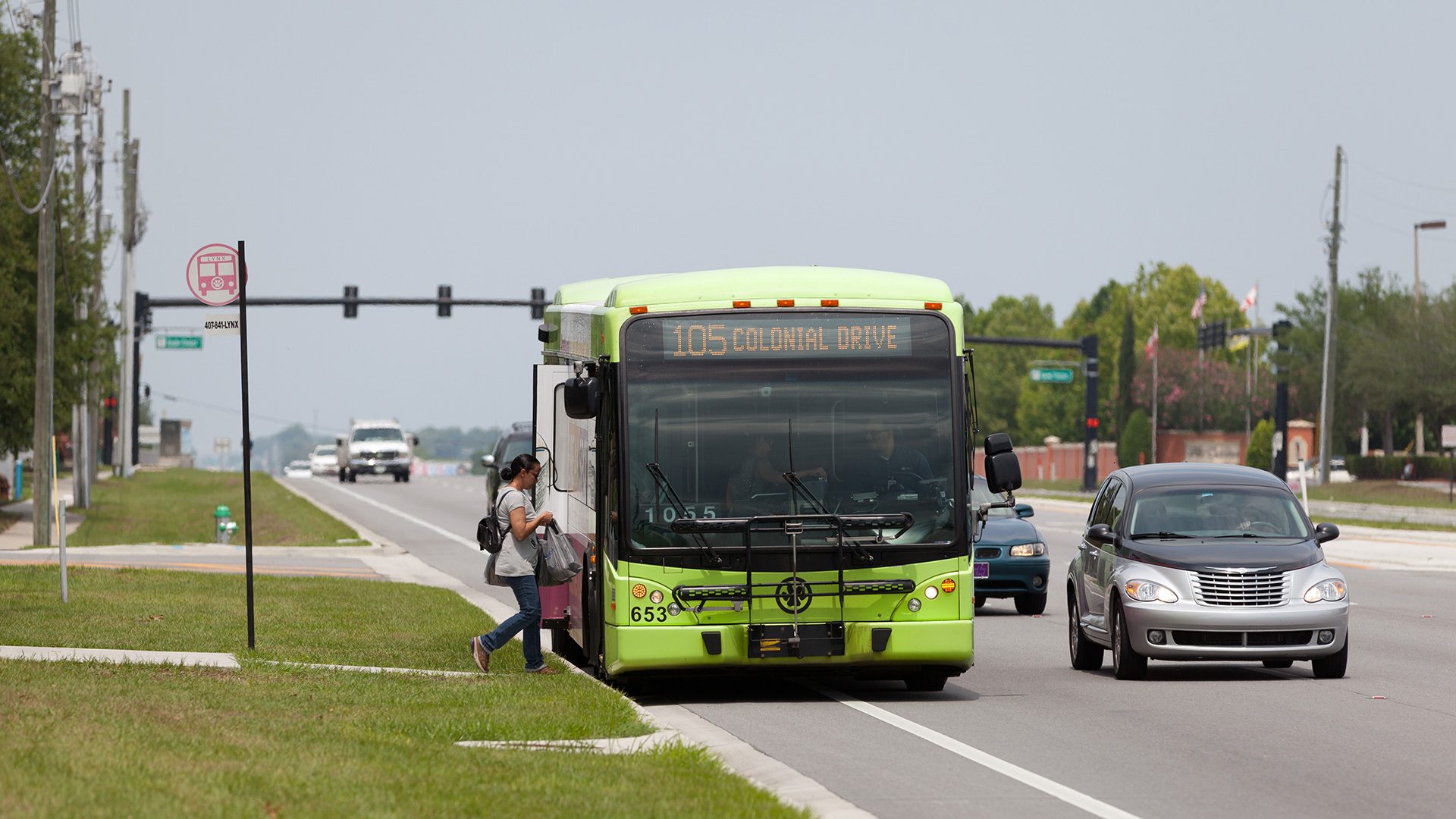 A passenger boards a LYNX bus in Orlando, Florida. LYNX is a US transit agency that is starting to deploy electric buses on a pilot basis.

Despite these barriers, some transit agencies – including LYNX – are starting to deploy electric buses on a pilot basis. To overcome the gaps in skillsets and experience, LYNX partnered with organizations with expertise in the field. The local utility company, the Orlando Utilities Commission, is leading the procurement of charging infrastructure and evaluating the full lifecycle of the buses’ batteries.

LYNX also engaged the Center for Transportation and the Environment, a non-profit research organization, to model how the electric buses would perform in a variety of weather and demand conditions. Manufacturers like Proterra are also thinking of ways to bridge the knowledge gap. They now offer transit agencies the option of buying the buses, but leasing the batteries.

LYNX’s pilot deployment is limited to its downtown circulators, with short enough routes that the electric buses could complete a whole day of service before needing to be re-charged. A systemwide deployment would likely need additional charging infrastructure to charge buses as they travel, at major stops, or at the endpoint of the routes. Larger deployments planned in Los Angeles and New York City are likely to give us the first lessons for managing battery electric bus fleets in the US.

However, LYNX provides a great example for how transit agency leaders in the United States can start overcoming barriers to deploying electric buses. Given the documented benefits and the proven track record in China and Europe, I hope to see more agencies develop or engage experts in the subject to ramp up fleet electrification quickly.

Kittelson & Associates, Inc. is a transportation consulting firm that is committed to helping public agencies in the US adapt to new technologies and support their communities with safe, efficient, and equitable transportation options. The topic of electric buses is one I’m tracking closely, so feel free to reach out to me to discuss further!